Book four in the Kait Silver series is coming! It has a release date of January, but will be releasing early. Likely within the next 2-3 weeks, depending on editing. Yay! If you haven't preordered yet, you can do that here.

By the way, Bad Medicine, book four, has the most preorders I've had ever. Thank you guys for making it happen. 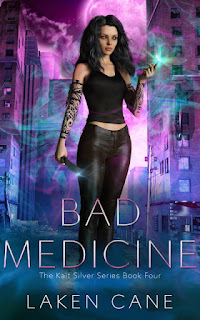 Do you know what’s stronger than a wolf shifter?

A shapeshifter is stronger than a wolf shifter.

When I discover a shapeshifting serial killer is targeting human women in my city, I have to go after him.

Even though he's more powerful than me.

Even though he says we're exactly the same.

Even though there's a connection between us.

He believes he's only taking out the trash, that the women he slaughters deserve their punishment. Too bad for him no one else agrees. They want him stopped.

And too bad for us that stopping him is nearly impossible.

The council sends me after him and tells me to bring him to them alive. They don't have to give me orders when it comes to the shapeshifter, because as long as he's free, he's going to be a danger to Lucy. And I'll do whatever I need to do to protect her.

But things get complicated when Adam Thorne has his goons attack me...

and guess who saves my life?

Add in a protective alpha who grows hotter with every passing night, a detective who is starting to remember things that may destroy him, and an enemy with a past that'll break your heart, and my life becomes one big chaotic mess.

Then there's the dawning realization that my own past holds a long-buried secret, a secret my gut tells me I don't want to dig up. There are truths that will change everything I thought I knew about my father, my mother, and most of all, myself.

I want to keep that secret hidden in the shadows, but it's creeping out.

Or you can get the entire series.

Also, Kait Silver paperbacks are coming! I'll get the proof to Broken Moon on the 23rd, and if it's good to go, I'll release the paperback. The others will follow shortly.

Audiobooks are coming, as well, but I don't have a release date on those just yet.

You can sign up for my newsletter for information on releases, upcoming series, and more.