If you haven't read the books yet, now is your chance to get addicted for FREE!
Book one of the urban fantasy Rune Alexander series is free until May 4th.
I'm currently writing book 10 in this series, so you'll have a lot to binge read. :) 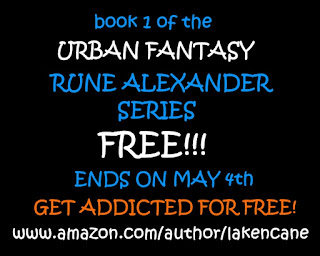 Posted by Laken Cane at 7:52 AM No comments:

We, the Forsaken--Kindle Countdown Deal!

Guys, free book from my friend Julia Lake Mills! Grab it while you can.
---

She trusted him with her future. How could she have known it was her heart she had to protect…

The Vampire Blood Courtesans.
It's not supposed to be about love...until it is.

I know stealing is wrong but those poor, forgotten children needed my help. I had no other choice. For a few short weeks, I made a real difference.But my luck ran out. In the blink of an eye, I went from an angel of mercy to a mouse caught in a trap.

Now, I have a choice to make…give up everything I’ve ever known or trust a vampire to make it all go away.
He says he can give me back my life, my career…everything I’ve worked so hard to achieve.
But there’s a price…

In a world where blood is a commodity and sex is the prize, this cold, aloof vampire is my only way out…or is he?

Be sure to check out the photos under the CREWSADERS tab for updated pictures fans have sent me. They're wearing Shiv Crew shirts and they look AMAZING!
Keep sending me photos, guys. I've gotten pictures of you guys in the shirts, holding the books, wearing Rune for Halloween, even fan art!
I love them all.

To give you an update on the writing progress, I'm currently working hard on getting Rune Alexander #10 finished. I posted an excerpt in the Shiv Crew group--mainly because I'd pulled an April Fools' Day joke that wasn't too funny, haha. I informed the group that I was no longer writing Rune Alexander, but instead was going to concentrate on a romantic comedy about a gardener and her love for a garden gnome who was hiding from the law.

Some of them believed me, which made me feel pretty bad. (And amused, but we won't talk about that :D )

I don't actually know when I'll be ending the RA series, but I'm pretty sure there'll be a couple more before it's over.

As soon as #10 is finished I'll concentrate more on Forsaken 2 and Waifwater 2--I'm working on them now, but in bits and pieces and pretty slowly.

Off to work. Talk with you guys soon!