It's written, guys! As soon as edits are done, I'll release it on Amazon. :)

We, the Forsaken--book one in the Forsaken series.
Paranormal Post-apocalyptic--
----
Teagan realizes she's not exactly safe in her little town of Crowbridge, but she is surviving.

She fights the few baddies who wander into her town, understands the importance of silence, and learns the true meaning of isolation. 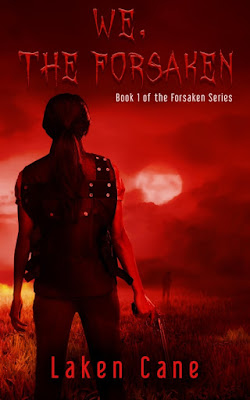 Then, with the arrival of one strange little girl, everything changes.

Teagan discovers just how isolated and sheltered she's been when the outside world stomps into Crowbridge, bringing with it darkness, death, and destruction.

When something unspeakable occurs and changes everything she is, the hunted becomes the hunter as Teagan prepares to take back her world.

She must conquer her demons as she begins her search for two things--the precious one she lost and the savage, evil beings who want to enslave her.
--
~Book one, Forsaken series, We, the Forsaken
Coming soon!