"Oh Laken Cane, I confess I have held onto The Witch's Daughter afraid to dive in based on the reactions of the crew after they had read it.
I finally delved in. Straight through with about 3 hours of sleep in between.
Brilliant. You are like no other and the series is in a class and truly a world of it's own.
I am gushing...but having just finished, damm. Oh, and I forever remain a Z girl wink emoticon" ~Cindy Enriquez

Laken's books
Posted by Laken Cane at 7:59 AM No comments:

"Laken Cane--whoever she is in her real life (and I have my suspicions)--can draw a reader in like very few authors I've ever read."
~Merrylee from Manic Readers
Posted by Laken Cane at 1:16 PM No comments:

The BOXED SET is now up to $8.99. Still a great deal--you get three Rune Alexander books which are regularly priced at $3.99 each. Get yours before the set goes up!

Posted by Laken Cane at 1:15 PM No comments:

Two things to talk about this morning--

One, I'm running a special on the first three books in the Rune Alexander series! I've combined them into a boxed set, and you can get Shiv Crew, Blood and Bite, and Strange Trouble all for $4.99. What?! ;)
These books are normally priced at $3.99 each, so you'll be saving a lot of money on this deal. It's very temporary, so get it while you can. Share on your social media sites and tell your friends!
Also, for those of you who prefer paper, all my books are available in print as well. Just not in boxed sets. ;)

Here's the cover for the boxed set. I've also done a little rewriting and condensing on the blurbs. 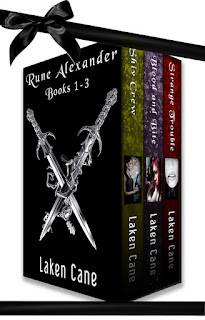 The somewhat unstable and damaged leader of
Shiv Crew, Rune Alexander, discovers a
faceless human is torturing the supernatural
groups in her city. Her job is to protect
humans from the supernatural beings, known as
Others, but now she and her crew must break
the rules and begin to protect the Others
from the humans.

And as the darkness inside her becomes
stronger and she ends up on the wrong side of
a battle she must not lose, who will save
Rune from herself?

With a mad vampire master she must destroy, a
child she must save, and unimaginable screams
from a past she has to ignore, Rune has her
hands full. But there is always something new
and terrible waiting in River County--
waiting, it seems, just for her.

A baby necromancer calls her mother from the
grave, starting a zombie infestation Rune and
the crew are not prepared to handle.

But as always, they jump headlong into battle--a battle that will lead into some of
the darkest moments of Rune's life. Moments
that will shatter her tenuous grip on sanity
and make her long for the man whose abuse
allowed her to function.

With Strad Matheson and the crew behind her,
Rune will stride through hell, horror, and
the endless, black despair of her own mind to
show the monsters why Shiv Crew is the
scariest group of warriors they will ever
face...

Christina Anne Matticks posted on my FB showing me what she'd dressed up for on Halloween. Here is what she posted, with picture. :)

"So, I read this book series last week called the Rune Alexander series, and I kind of put together a costume from that at the last minute lol. They're really great books if anyone is looking for something to read." 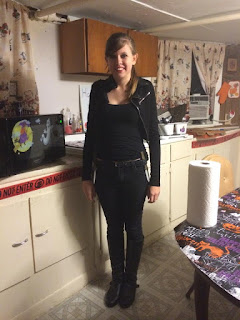 Posted by Laken Cane at 9:18 AM No comments: