The Witch's Daughter
Book 7 in the Rune Alexander series

In book seven of the Rune Alexander series, Rune meets new allies, enters a bizarre and vaguely familiar world, and realizes all over again that she can never really trust anyone.

Except, maybe, the one she lost...

Sucked into Skyll by the echoes of Wormwood, she must complete a very important task in order to return to the world in which she belongs.

She realizes that when she does return, her world will be changed.

If...because Skyll contains something more precious to her than anything in ANY world.

But the Others of her world--all Others, including those she loves--will die if she stays.
Either way, her choice will shatter not only her, but those who love her.
Those who need her.

Join Rune as she walks through the world of her creation. She'll find old faces and new enemies, will uncover bitter secrets, and will have to fight horror without her monster or her crew.

She will come to understand quickly that torture and despair are the rule, and that tiny silver threads of hope are all that keep Skyll from plunging over the edge to be lost forever in the black depths of hell. 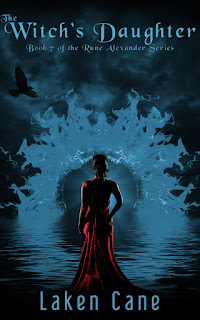 Email ThisBlogThis!Share to TwitterShare to FacebookShare to Pinterest
Labels: blurb, book seven of the rune alexander series, the witch's daughter